Future of Voter Accessibility is in Technology, Empowerment

“The brass ring and gold standard will be when there’s not just a single machine dedicated for use, but that all voting machines are universally accessible to all voters. I’m confident we’ll get there.” – Dr. Chris Rosa, president and CEO of The Viscardi Center

Future of Voter Accessibility is in Technology, Empowerment

NEW YORK CITY – October 10, 2022 – The progress and challenges of ensuring all voters, regardless of disability, have equal access to cast a ballot was the focus of discussion among a group of panelists at New York City’s famed Hunter College on Sept. 28. The Voting Technology, Accessibility, and Security forum featured security experts, accessibility experts, area election officials and subject matter experts from Election Systems & Software (ES&S). 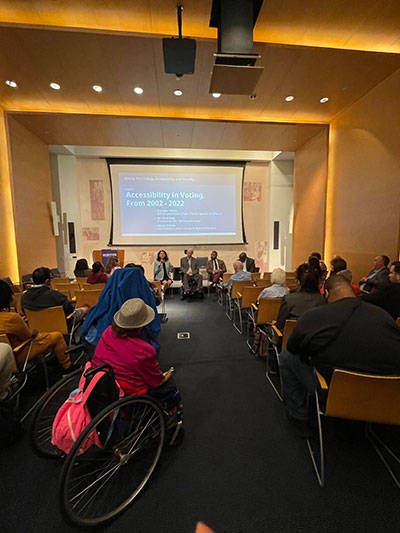 Dr. Chris Rosa, president and CEO of The Viscardi Center, a disability empowerment organization in New York, began the discussion by citing heartening statistics from the 2020 Presidential election. According to Dr. Rosa, research shows that 62 percent of voters with disabilities voted in 2020, up from 56 percent in 2016. Rose says this growing trend of voter participation is thanks to a culture shift sparked by the passage of the Americans with Disabilities Act (ADA) and funding provided by the Help America Vote Act (HAVA).

“We still have a distance to travel, but it would be a mistake not to honor the progress that’s been made over the last 20 years. The ADA’s impact on voting for people with disabilities has as much to do with changing cultural expectations about full participation of voters with disabilities,” Dr. Rosa said. “The brass ring and gold standard will be when there’s not just a single machine dedicated for use, but that all voting machines are universally accessible to all voters. I’m confident we’ll get there.”

Nicole DiRado, the Board of Elections Administrator for nearby Union County, NJ, led the county’s efforts to implement secure, universally-accessible equipment in 2019. She shared with forum guests that during the county’s implementation, they hosted more than 300 voter outreach events for public demonstration, gathering feedback on usability to ensure all voters felt enfranchised and comfortable when they went to cast their vote.

“What I can do as an elected official is ensure that the disability community is involved in our decision-making processes and have a seat at the table,” DiRado said. “When we transitioned [to the ExpressVote® XL] in 2019, the reception was overwhelmingly positive. There are so many aspects to the technology that the public was really receptive to.”

“The future has the potential to create polling places where regardless of your physical ability, we’re all voting on the same machine,” said Brandon Clifton, ES&S Sr. Vice President of Government Affairs, who also participated in the forum. “At ES&S, we’re proud to offer products designed so that any voter of any background or experience can share the same independence and privacy that we all deserve.”

Challenges remain in education, training and funding. Ensuring voters have equal access to the ballot means training poll workers to properly educate voters using assistive technology at the polls. It also means ensuring jurisdictions have the necessary resources to deploy that technology. 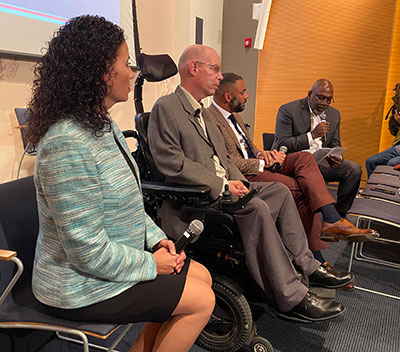 “HAVA helped us fund the mechanisms which assist the disability community,” DiRado said, “but we’re hopeful we’ll see continued funding to ensure all of our polling locations are accessible.”

“Long-term federal funding is needed so we can continue to see the accessibility improvements that have been made in these recent years,” Clifton said. “Without a similar type of commitment, we won’t see the longevity of change we experienced with HAVA.”

With a commitment from technology suppliers like ES&S to continue to create secure, auditable, universal voting systems that are accessible to all, the overall outlook among panelists was positive, thanks to continued valuable collaboration with election officials and disability advocates.

The accessibility forum was one of three panels focused on the future of elections, led by Dr. Basil Smikle Jr., distinguished lecturer and director of the Public Policy Program at the Roosevelt House Public Policy Institute at Hunter College. Additional panel discussions featured representatives from Cybersecurity and Infrastructure Security Agency (CISA), the Center for Internet Security (CIS), area election officials and ES&S.