“Prepared in Mind and Resources”
— More Than a State Motto

The Palmetto State provides voters with an enhanced, resilient and dependable voting system for years to come.

A paper record of every ballot cast has become the gold standard for elections across the U.S. South Carolina was one of a few states across the nation voting on systems that did not produce a paper trail. 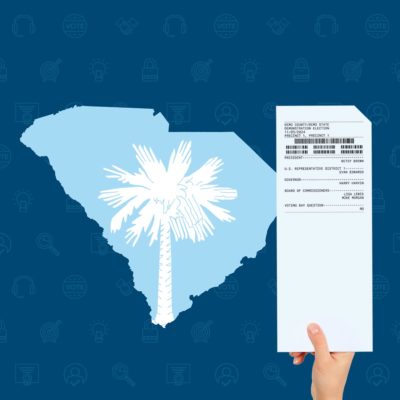 Almost every Tuesday, there is an election being held somewhere in South Carolina. Up until the state decided to upgrade its equipment, South Carolinians had been voting on touch screens for 15 years. The state recognized paper ballots add an important layer of security to the election process and gives their more than 3 million registered voters across 46 counties more confidence in the accuracy of the state’s elections.

South Carolina’s original plan was to work with ES&S to complete the implementation, training, etc., and have their first use of the new equipment in the state’s February 2020 presidential primary. Implementation and training went so well; the state opted to use the machines four months ahead of schedule. Two South Carolina counties held successful first-use elections in October 2019, and 40 counties held equally successful elections with their new equipment in November 2019.

“We went above and beyond for South Carolina in providing stellar customer service. In such large implementations, there are a lot of questions with a lot of moving parts. With the help of our partner, Printelect, we were able to be incredibly nimble and serve the state quickly and effectively.” – ES&S Account Manager, Cara Florence

What South Carolinians Have to Say