“We’re really happy with ExpressVote, and the voters are too. Every voter I spoke to likes the machines, the verifiable paper ballot, and the ease of use. Being the chief election officer in the county, I also like that the cost of the paper ballot with ExpressVote is much less expensive than a pre-printed paper ballot.” – Tony Brown, Laurel County, Kentucky, Clerk

OMAHA, Nebr. – November 17, 2021 – – More jurisdictions across America are increasing security and accessibility in elections by giving voters a choice in how they cast their ballots, with a majority of voters in several jurisdictions choosing the latest in secure voting technology over more traditional ways of casting ballots.

In Palm Beach County, Florida, voters have had access to ExpressVote® universal voting machines since the county acquired them in 2019, but they were primarily used by voters utilizing the machine’s ADA capabilities. Supervisor of Elections Wendy Link saw early voting in their county’s congressional special election on November 2 as an opportunity to expose more voters to this secure, easy-to-use technology. The election marked the first time a Florida county used ExpressVotes for all voters since the state switched to paper ballots, and the response from voters was overwhelmingly positive. Many told election officials that using the ExpressVote was both quick and easy.

“We had traditional ballots available in the event a voter asked to mark with a pen; however, only five voters voted using a pen during the nine-day early voting period,” Link said. “We chose the ExpressVote for several reasons, including cutting down on the check-in/ballot on-demand printing time, the accessibility factors, and reduced cost of consumables. Using the machines during this election also reduced the number of voter intent questions that the Canvassing Board needed to review, which contributed to timely results reporting.”

Palm Beach County is just one of a growing number of jurisdictions nationwide that elect to use the ExpressVote as the primary way for voters to mark their paper ballots. Using the ExpressVote touch-screen technology, voters can see and review their paper ballot before casting their vote, and the marks they make on their ballot are never unclear or able to be misinterpreted. It was this auditability, ease of use, and accuracy of the equipment that prompted Fairfax County, Virginia, to encourage all voters to use the ExpressVotes during early voting for the November 2021 election.

“We had 249 different ballot types, and we used the ExpressVote for ballots on demand. It was easier than stocking a huge quantity of ballots for 16 early voting locations for 109,000 voters,” Scott Konopasek, Fairfax County General Registrar and Director of Elections said. “We found that the key benefits were not only in the savings of time and paper inventory but also in reducing voting errors in marking the ballot.”

Konopasek was extremely happy with the performance of the equipment, and voters liked the choice as well. Those who came to the polls had the choice to use the ExpressVote to mark their paper ballots or mark their ballots with a pen. In early voting locations open 45 days prior to the election, only 10 to 30 percent of voters chose the traditional pen and paper.

“At first, some voters were hesitant because it was a new experience,” Konopasek said, “but we had a lot of feedback from those who used the machines saying the ExpressVotes were easy to use.” 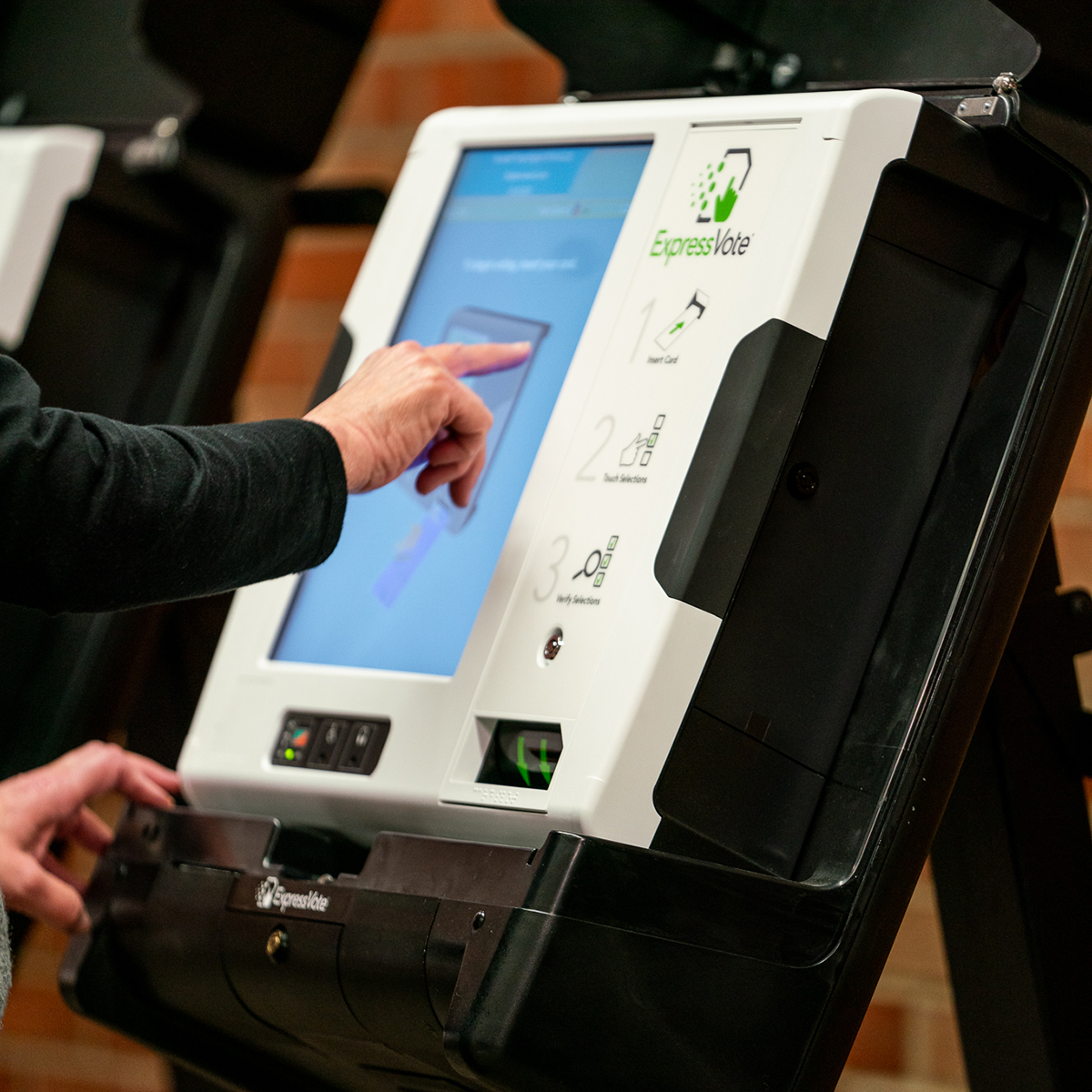 Laurel County, Kentucky, wanted the added security, verifiability and auditability of a paper ballot combined with the ease and efficiency of technology. In the June 2020 primary election, poll workers offered voters the option to mark their paper ballots using the county’s new ExpressVotes or mark pre-printed ballots with a pen. More than 98 percent of voters opted to use the machines. Following the enthusiasm expressed by voters to overwhelmingly choose the ExpressVote over traditional paper ballots, election officials decided to use the ExpressVote as the primary marking device for all voters following the 2020 Presidential Primary.

“We’re really happy with ExpressVote, and the voters are too,” Laurel County Clerk Tony Brown said. “Every voter I spoke to likes the machines, the verifiable paper ballot, and the ease of use. Being the chief election officer in the county, I also like that the cost of the paper ballot with ExpressVote is much less expensive than a pre-printed paper ballot.”

“The ExpressVote has been proven time and again to be secure, reliable and easy to use,” said Mac Beeson, ES&S regional vice president of Sales. “We are so pleased with the performance of ES&S equipment in Kentucky, Virginia, Florida, and all across the nation, and we’re proud to partner with our jurisdictions as they use this new technology to ensure elections are secure and accessible to all.”